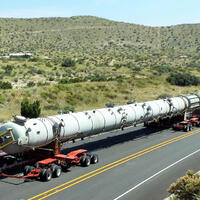 What is a deaerator? What does it do? How does it work?

A deaerator is a device that is widely used for the removal of oxygen and other dissolved gases from the feedwater to steam-generating boilers.

• Deaeration is the process of removal of oxygen, Carbon dioxide and other non-condensable gases from boiler feed water thereby reducing the risk of corrosion in the pressure parts of the boiler.

How are Deaerators Designed?

There are three types of deaerators. They are: 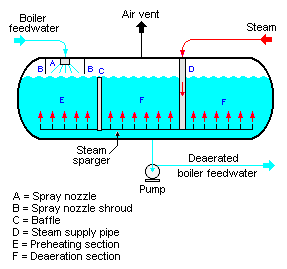 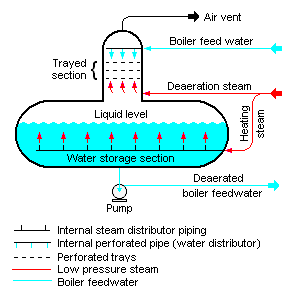 Deaeration is based on two scientific principles.

A deaerator utilizes both of these natural processes to remove dissolved oxygen, carbon dioxide, and other non-condensable gases from boiler feed water. The feed water is sprayed in thin films into a steam atmosphere allowing it to become quickly heated to saturation temperature.

Spraying feed water in thin films increases the surface area of the liquid in contact with the steam, which, in turn, provides more rapid oxygen removal and lower gas concentrations. This process reduces the solubility of all dissolved gases and removes it from the feed water. The liberated gases are then vented from the deaerator.

The complete removal of gases is taking place in vapor tank with incoming water spray. Water sprayed from the top (fixed in two headers with five nozzles in each to spray the CEP water into fine particles covering entire cross section of the tank) and passed through perforated SS trays at different levels to provide enough scrubbing of water with upcoming steam from storage tank through interconnection pipe. 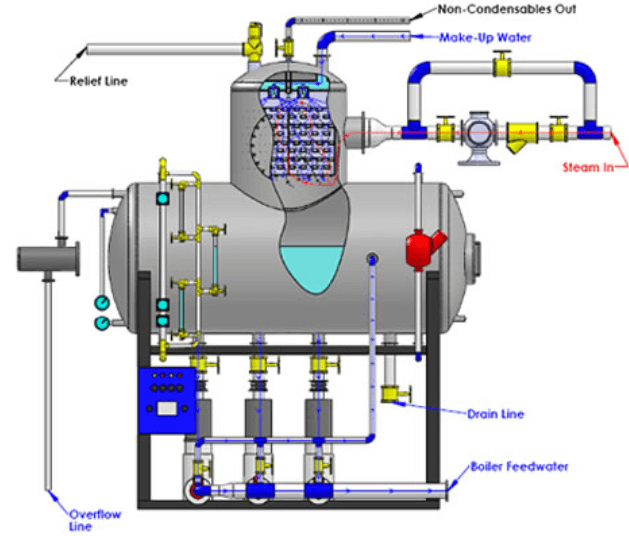 Since 1910, Boardman has been a respected custom fabricator. We take pride in our ability to take the most stringent specifications and requirements to provide a high quality solution to our customers.With more than 75 years of ASME Section VIII, Division I engineering experience, we have the unique ability to provide custom solutions to our customers.