Working one’s way through the ASME Code (hereafter referred to simply as the Code) on the subject of unfired pressure vessel openings has been compared by some as similar to interpreting income tax form instructions. Here is a typical example passage taken from the Code:

When spacing between adjacent openings is less than twice but equal to or more than 1¼ the average diameter of the pair, the required reinforcement of each opening in the pair shall be summed together and then distributed such that 50% of the sum is located between the two openings. [UG-39(b)(2)]

Whew! The subject of pressure vessel openings is a complex one that is normally presented in a broad scope that will include no less than seventeen separate Code Paragraphs and four Code Appendices. In contrast, this course emphasizes the specialized subtopic concerned with the permissible shape, size, and location of openings, and the correct determination of their governing design dimensions.

This has been accomplished through the deliberate limitation of the course scope; the subject of reinforcement and its related calculations have been intentionally minimized. The traditionally presented busy cross-sectional diagrams, like the one shown here, to depict nozzle-to shell attachment schemes, have been replaced with simple line drawings. A perspective heretofore not provided has been created because the emphasis is on subjects not generally offered. A worked-out illustrative example is provided at each point where a major concept is introduced. Liberal use of simple graphics to translate the Code’s legalese aids in its interpretation.

Discussion is limited to internal pressure forces. External loadings on nozzles (and thus their openings) can, and often do, operate in concert with internal pressure. These can be torques, moments, or axial loads, or combinations thereof, through mechanical or thermal transmission.

Pressure vessels store energy and as such, have inherent safety risks. Many states began to enact rules and regulations regarding the construction of steam boilers and pressure vessels following several catastrophic accidents that occurred at the turn of the twentieth century that resulted in large loss of life. By 1911 it was apparent to manufacturers and users of boilers and pressure vessels that the lack of uniformity in these regulations between states made it difficult to construct vessels for interstate commerce. A group of these interested parties appealed to the Council of the American Society of Mechanical Engineers to assist in the formulation of standard specifications for steam boilers and pressure vessels. (The American Society of Mechanical Engineers was organized in 1880 as an educational and technical society of mechanical engineers). After years of development and public comment, the first edition of the Code, ASME Rules of Construction of Stationary Boilers and for Allowable Working Pressures, was published in 1914 and formally adopted in the spring of 1915. The first Code rules for pressure vessels, entitled Rules for the Construction of Unfired Pressure Vessels, followed in 1925. From this simple beginning the Code has now evolved into the present eleven Section document, with multiple subdivisions, parts, subsections, and mandatory and non-mandatory appendices. Almost all pressure vessels used in the process industry in the United States are designed and constructed in accordance with Section VIII, Division 1. This course is limited to this Section and Division.

A Code Vessel By Any Other Name

In contrast to the indefinite length and somewhat open nature of a piping system, a pressure vessel is a closed container of limited length. It is characterized by the fact that its smallest dimension is considerably larger than the connected piping. The Code defines pressure vessels as containers for the containment of pressure with 15 psi < P < 3,000 psi. Along with these defined upper and lower pressure limits, containments generally smaller than 6 inches in diameter or 1½ cubic feet in volume are not classified as Code pressure vessels. The term Code vessel implies that it was designed and fabricated in accordance with the rules of the Code; it may or may not be Code stamped. The most common form of welded joint pressure vessel used today is the cylinder. Spheres are used extensively for the containment of gases under pressure.

Openings in tanks and pressure vessels are necessary to carry on normal operations. They allow for the mounting of equipment, the insertion of instrumentation, and the connection of piping to facilitate the introduction and extraction of content. Handholes are provided in vessels to permit interior inspection and manways allow personnel to gain access to their interiors. Openings are generally made in both vessel shells as well as heads. Unfortunately, these openings also result in penetrations of the pressure restraining boundary, and as such, are seen as discontinuities. Discontinuities weaken the containment strength of a pressure vessel because stress intensification is created by the existence of a void in an otherwise symmetrical section.

A considerable amount of attention has been given to the effects of these penetrations on ultimate strength. For many years the ASME has studied actual conditions and ramifications of openings with regard to overall pressure vessel safety. The current Code requirements, which incorporate ample safety factors, stem from a culmination of these studies. The methods used for determining the acceptability of pressure vessel penetrations has evolved over a long period of years and they have now been standardized. Pipe branch connections (ASME B31) and nozzles in large petroleum storage tanks (API 620/650) are treated in a similar fashion using many of the same concepts developed from ASME Code vessels.

The Shape of Things to Come

The Code places no limit on the permissible shape of openings; however, circular, elliptical, and obround geometries are preferred. The shape formed by a circular opening, the axial orientation of which is not perpendicular to the vessel wall or head, is elliptical. Elliptical openings are developed by two distinct means which will be described momentarily. An obround opening is one which is formed by two parallel sides and semicircular ends.

The geometry of an opening influences the distribution of localized stresses. Stress intensification occurs at the intersecting sides of polygonal openings. The Code requires that the internal corners of this particular shape be rounded (no radii recommended) in order to mitigate the intensity.

Correct evaluation of openings involves a comprehensive investigation to discover the governing, or greatest dimension, associated with the opening. The Code requires that the governing size be determined by consideration of all of the planes through the center of the opening and perpendicular to the vessel surface. If the vessel design requires the incorporation of a corrosion allowance, then the final size determination must be based on the corroded condition.

Problem: A rectangular opening 6 inches by 3 inches will be made in the shell of a pressure vessel whose design dictates a corrosion allowance of 1/16 inch. Determine the Code defined governing size d' and check the major to minor axis ratio for special twisting moment provisions.

Find: The Code defined value of d' and the opening’s aspect ratio. 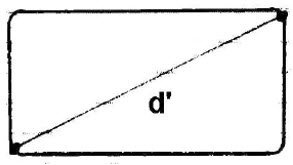 Solution: On first inspection, the major axis dimension of 6 inches would appear to govern; however, the Code requires that all planes be considered. Therefore,

The aspect ratio is 6/3 = 2, ˆ restraint against a short dimensional twisting moment is not required.

A law of fluid mechanics states that fluid (liquid or gas) pressure at any point is equal in all directions and is always directed perpendicular to the resisting surface. It is for this reason openings must be viewed from a perpendicular perspective relative to the opening’s X (major) and Y (minor) axial planes. This is accomplished through the use of what is known in engineering graphics as an auxiliary view which is generated along an axis normal to the pressure resisting surface. This is the only visualization which reveals the true geometry and true dimensional lengths of the opening under consideration. In no other fashion can the governing, i.e. greatest, dimension be determined. This satisfies the Code requirement to consider all of the planes through the center of the opening and perpendicular to the vessel surface.

Why Care About True Shape?

As just stated, the true shape of an opening yields the Code governing size of the opening; this is the one that produces the largest opening cross section. This quantity must be ascertained as part of the Code procedure for determining an opening’s stand-alone strength, or its need for reinforcement. The Code’s method of analyzing penetrations for their adequacy when subjected to internal pressure is one of a two dimensional cross-sectional area replacement theory. The mathematical process of simple area replacement can be thought to be analogous to one of bookkeeping. That is to say, a single large debit (the penetration) can be offset by the sum of several generally smaller credits (excess shell or head thickness, excess nozzle wall thickness, welds, and if necessary, an added reinforcing element). But of course, the Code defined total amount of material removed by the largest cross section must first be determined. This is where the importance of the opening’s true geometry comes into significance. Here is a simplified version of the Code formula:

Going Through the Orientations 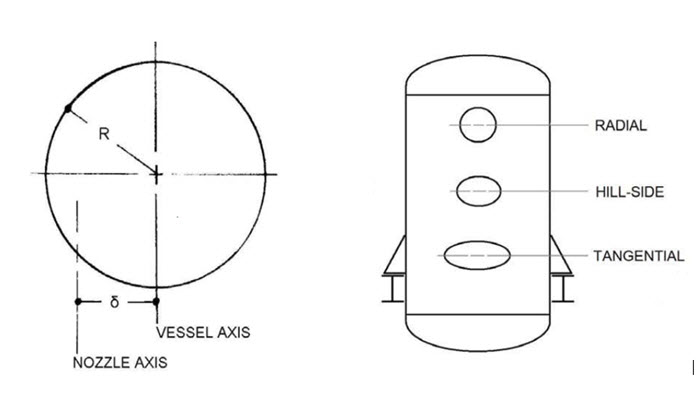 Openings are divided into the two broad classifications of radial or non-radial. The Z axis of a radial opening emanates from the center of the radius of curvature whose surface it penetrates. The best way to depict the various orientations is through the nozzle diagrams below. Nozzle is the term given by tank and pressure vessel designers to the connecting appurtenance which generally projects beyond the vessel’s surface and terminates with a means of joining piping or equipment.

• The Code at UG-37(a) defines d' for non-radial openings as the chord length at mid-surface of thickness. From the rules of circle segments the general formula for chord length is 2R sin ½ γ. This means that the value of R + ½ t and the angle γ must be determined first in order to ultimately determine the value of d'.

• The resulting opening would be an ellipse with a major (X axis) to minor (Y) axis ratio of 10.058/6 = 1.68. Since this value is # 2, restraint against a short dimensional twisting moment is not required.

In the next edition, we will continue looking at different openings in ASME Code Pressure Vessels.