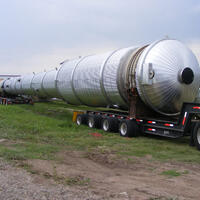 Tall pressure vessels are generally defined as those where the height to diameter ratio (H/D) is more than 15. These vessels are built these days as self-supporting structures, i.e., they are supported on cylindrical or conical skirts with a base ring resting on a concrete foundation and firmly fixed to the foundation by anchor bolts embedded in concrete. Basically, they are designed as cantilever beams.

Tall vessels must be capable of withstanding the following loadings:

Tall vessels may also be subjected to applied forces and moments from thermal expansion of piping. The most critical combination of loadings that causes the highest stresses may not occur when all of the loads are applied at the same time. Certain loads may cause critical stresses during the time of erection of vessel, whereas other combinations of loadings may cause critical stresses when the vessel is filled. The proper design of the vessel requires examining several different loading conditions to establish the proper thickness and other requirements for a safe design.

The required thicknesses and other design requirements vary somewhat depending upon the design theory chosen. The maximum stress theory is chosen for design of most tall vessels, and is the theory used in ASME Section VIII, Division 1.

Axial tensile stress due to internal pressure in the shell of a closed vessel is given by the following formula:

Circumferential tensile stress due to internal pressure in the shell of a closed vessel is given by the following formula:

External pressure acting upon a cylindrical shell and its heads may result in the failure of the vessel either by yielding or by buckling. If the vessel has relatively thin wall, the stress at which the buckling begins to occur is usually below the yield strength of the material. If the vessel has a relatively thick wall, the stress at which the buckling occurs is the yield point of the material under consideration at the temperature of service.

For vessels operating under external pressure, the design is based upon the critical pressure at which buckling occurs rather than upon the allowable stress for the material.

Stresses caused by dead loads may be considered in three groups for convenience:

1) Stress induced by shell and insulation

At any distance, X feet, from the top of a vessel having a constant shell thickness,

For steel construction, the density of the shell material is approximately 490 lb/ft3, and for most insulation, the insulation density is generally taken as 40 lb/ft3.

2) Stress induced by liquid in the vessel

The total dead load stress acting along the longitudinal axis of the shell is then the sum of the above dead weight stresses. If the vessel does not contain internal attachments, such as trays which support liquid, but consists only of the shell insulation, the heads and minor attachments such as manholes, nozzles and so on, the additional load may be estimated as approximately equal to 18% of the weight of a steel shell.

Two distinctly different kinds of design considerations result from wind loading. First, the static force from the wind-loading pressure against the vessel causes an overturning moment that must be considered in designing tall vessels. The second consideration is the dynamic effect from vortex shedding of wind passing around the vessel.

The stresses produced in a self-supporting vertical vessel by the action of wind are calculated by considering the vessel to be a vertical uniformly loaded cantilever beam. The wind loading is a function of the wind velocity, air density and the shape of the tower and is given by the formula:

The shape factor for a smooth cylinder is 60% of that of a flat surface normal to the wind and having the same projected area as the cylinder. Projections of auxiliary equipment loaded on the tower will cause turbulence, and the use of value of Fs based on smooth cylinders is questionable. A value between 0.60 and 0.85, depending on the amount and the shape of projections, is generally used.

The appropriate wind velocity is dependent on the location in which the equipment is to be erected. In addition to the shape factor, the wind velocity pressure is also affected by the height factor. This factor is taken as 1.0 for towers having heights from 30 to 49 ft. For other heights, the height factor varies directly as the (height/30) raised to the 1/7 power.

After determining the values of wind loading and the projected upon which it acts, the bending moment any distance X from top of the tower can be expressed as:

ro = Outside radius of shell (inch.)

fwx = Stress at extreme fiber due to wind loads (psi): compressive stress on downwind side, tensile stress on upwind side

When a laminar wind flows by a circular pressure vessel, the wake behind the vessel is no longer smooth. There is a region of pressure instability in which vortices are shed in a regular pattern. These vortices cause an alternating force perpendicular to the wind direction that can make the vessel vibrate. When the frequency of vortex shedding coincides with the natural frequency of the vessel, a resonance is caused with increasing amplitude. To prevent this condition, the natural frequency of the vessel is set higher than the vortex shedding frequency determined by the maximum velocity of laminar wind at the vessel location. The resonant wind velocity is related to the height-to-diameter ratio of a cylindrical vessel.

Analyzing tall towers in a plant for vibration would be a time consuming process. The following criteria is used to investigate vibration possibility in a tower:

A sustained wind pressure will cause a tall tower to deflect with the wind. The magnitude of deflection may seriously influence the performance of the vessel and has to be limited to a certain value. If too small a deflection is specified, the shell thickness may have to be increased and the price of tower may increase. Most engineering specifications limit the tower deflection due to wind to a maximum of 6 in. per 100 ft of the tower height.

In tall vessels, one cause of stresses in the vessel wall is the overturning moment from the lateral force of an earthquake loading. ASME Code requires that the pressure vessels be designed to withstand earthquake forces; however it does not specify rules for the earthquake design of pressure vessels. It is up to the user to specify in the specifications the Code to be used, failing which the designer selects the Code based on his preference.

Two Codes used frequently for earthquake design are ANSI A58.1 Building Code, and Uniform Building Code. Both Codes rely on seismic zone maps to determine the appropriate earthquake factor. These maps indicate seismic zones according to the amount of damage caused by earthquakes. Current practice in designing a vessel for these earthquake forces is empirical and is based on theory of vibration. In both the Codes, the total lateral earthquake force is calculated by the following formula:

For a cylindrical shell of uniform diameter and thickness, the total lateral force V is distributed as follows:

For a shell of uniform diameter and thickness, this gives a triangular load distribution with the apex pointing downward. For calculating the moment, assume a concentrated loading of V-Ft applied at the centroid of the triangle, which is equal to ⅔h above the lower head-to-shell tangent line as shown in the figure below. 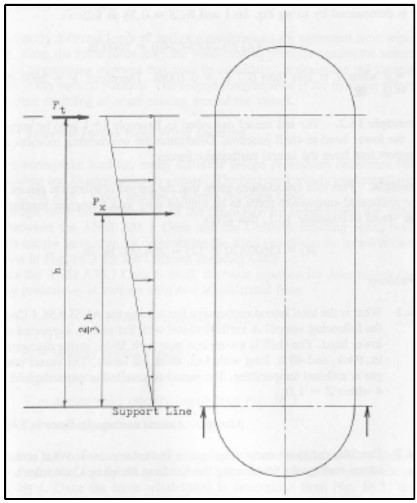 Once the values of Ft and Fx are determined and the moment arms to the respective forces are known, the overturning moment is determined as:

A controlling combined tensile or compressive stress occurs as a result of combination of stresses. It is important to consider the intended construction, erection and test schedule which is to be followed in erecting the vessel and placing it on stream. With this in mind, the conditions must be determined which establish the controlling stresses. The stresses condition of the vessel may be divided into the following possible cases:

Case 2: Vessel completed but shut down

In designing the shell, it is not necessary to allow for the compressive stress resulting from the weight of the liquid in the hydrostatic test since the bottom head transfers this load directly to the skirt (most tall vessels are supported by skirt). It is essential to check the lower sections for wrinkling failure before the final specifications are fixed.

This is presented to you as a service from BOARDMAN LLC. located in Oklahoma City, Oklahoma.