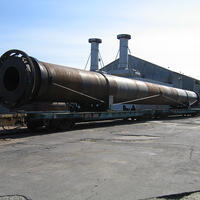 Seismic forces on a vessel result from a sudden erratic vibratory motion of the ground on which the vessel is supported and the vessel response to this motion. The principal factors in the damage to pressure vessels are the intensity and the duration of the earthquake motion. The forces and stresses in pressure vessels during an earthquake are transient, dynamic in nature, and complex. To simplify the design procedure, the vertical component of the earthquake is neglected, and the horizontal component is reduced to equivalent static forces.

Earthquake resistant design is largely empirical, based on seismic coefficients derived from the performance of structures subjected in the past to severe earthquakes. The fundamental requirement set forth in the US building codes (ANSI A58.1 that has now been readapted as ASCE 7 Code and Uniform Building Code) is that the structures in seismic risk zones must be designed to withstand a certain minimum horizontal shear force applied at the base in any direction. Having assigned a minimum value to the base shear based on the past experience, the problem which arises is how to resolve this shear into equivalent static forces throughout the height of the vessel in order to determine the shear and the bending moments in the structure at different elevations as well as the overturning moment at the base. The result depends in large part on the dynamic response of the structure, which may be assumed to be either rigid or flexible. For design purposes, it is assumed that the pressure vessel is fixed at the top of its foundation. No provision is made for any effects of the soil-structure interactions.

The pressure vessel and its foundation are assumed to be rigid and the assumed earthquake horizontal acceleration of ground, a, is transmitted directly into the vessel. The term rigid here is used in the sense of having no deformation.

Each section of the vessel will be acted upon by a horizontal inertial force equal to its mass and multiplied by the horizontal acceleration, a, of the quake movement. 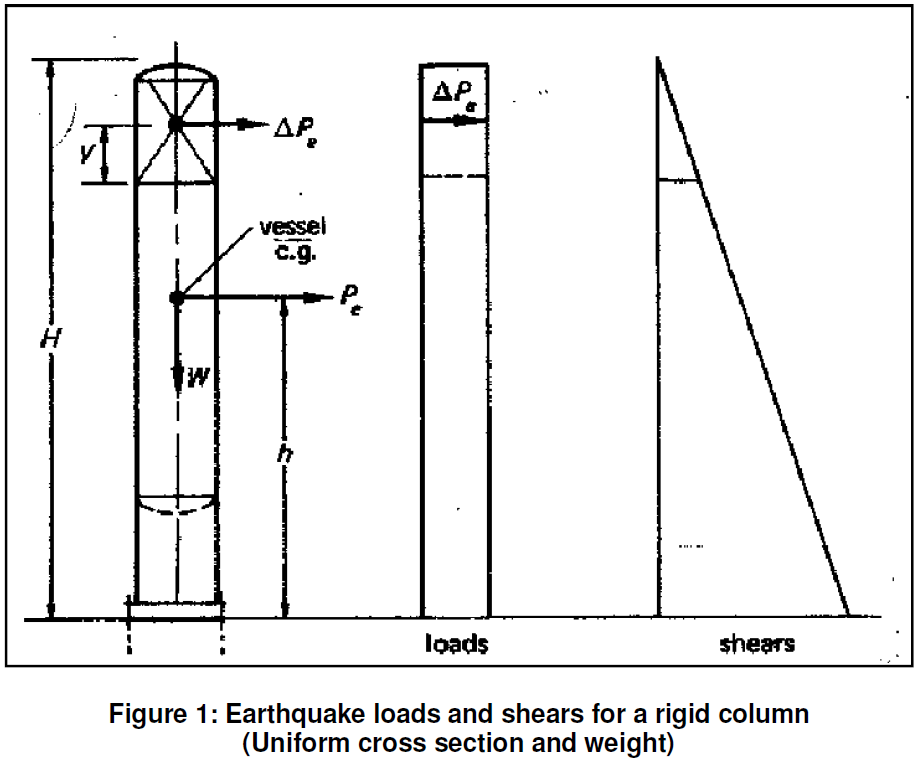 The usual value of c is given in Table 1.

Table 1: Values of the Coefficient c

The overturning moment at the base Mb is equal to Pe times the elevation h of the center of gravity of the vessel above the vessel base:

The simple rigid-structure approach was used in the early building codes. For a short heavy vessel or a horizontal drum on two supports this design procedure is easy to apply and probably justified. However, it cannot be reasonably applied to tall, slender process columns, regardless of their dynamic properties.

The sudden erratic shift during an earthquake of the foundation under a flexible tall cylindrical vessel relative to its center of gravity causes the vessel to deflect, since the inertia of the vessel mass restrains the vessel from moving simultaneously with its foundation. The vibration initiated by the induced elastic deflection is then gradually reduced by damping or partial yielding in the vessel.

From experience and theoretical studies, it is known that the vessel with a longer first period of vibration T and higher damping will be subjected to less total damage than a vessel with shorter T and smaller damping capacity, provided that it has the strength to withstand the sustained deflections.

A tall slender vessel represents a distributed system of multiple degrees of freedom and will be excited into a transverse vibratory motion, consisting of relatively simple deflection curves called modes, with the first fundamental most predominant. Each mode has a unique period of vibration. The first three modes for a cantilever beam of uniform cross section and weight are illustrated in Figure 2. Since the vessel will try to vibrate with a combination of natural frequencies, with the first frequency predominant, the resulting motion can become complex and determined by superposition. 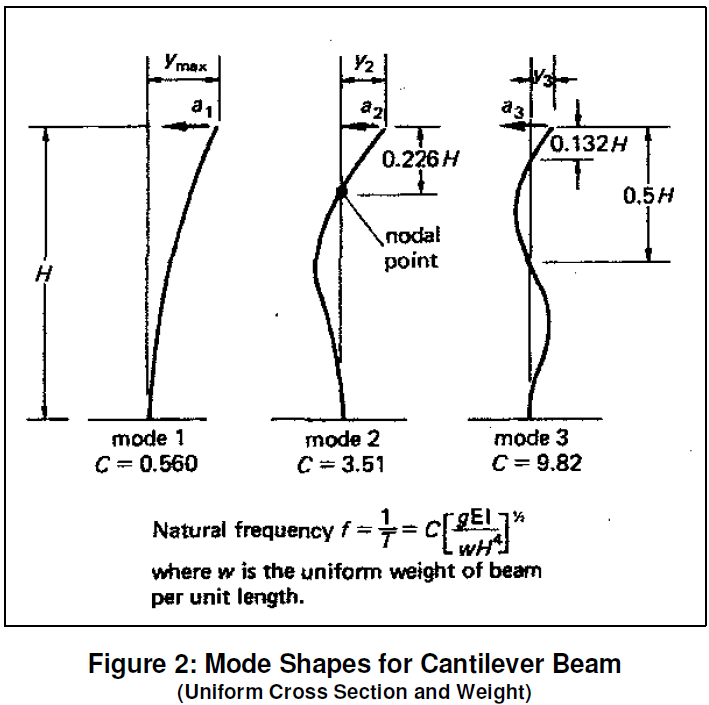 For practical design purposes, the building codes require all free-standing structures in seismic zones to be designed and constructed to withstand the minimum lateral force V applied at the base in any horizontal direction and equal to the product of the weight and empirical coefficients:

For check, the total lateral shear at the base is:

where Wp is the weight of the appendage and Cp is taken equal to 0.2. Force Fp is applied at the center of gravity of the attached equipment.

Since the higher modal responses contribute mainly only to the base shear, but not to the overturning moments, the base moment Mb and the moments Mx at levels hx above the base can be reduced by means of reduction coefficients J and Jx, and are given by the following equations:

For structures where the total mass is predominantly concentrated at one level and/ or it would seem reasonable to expect the structure to vibrate primarily in the fundamental mode, J = 1.0 is recommended.

Compute the seismic loads and moments acting on a cylindrical vertical process column of two diameters, as shown in Figure 3.

To determine the earthquake load distribution on a vessel with variable mass concentrations, or on a vessel of two or more diameters, the entire vessel is usually divided into n sections; not more than 10 sections are usually required, the exact number depending on the weight distribution. The weight of each section wi is assumed to be concentrated at the center of gravity of each section and the seismic loads Fi and the moments Mx are computed.

From Figure 3, the total lateral force at the base V equals 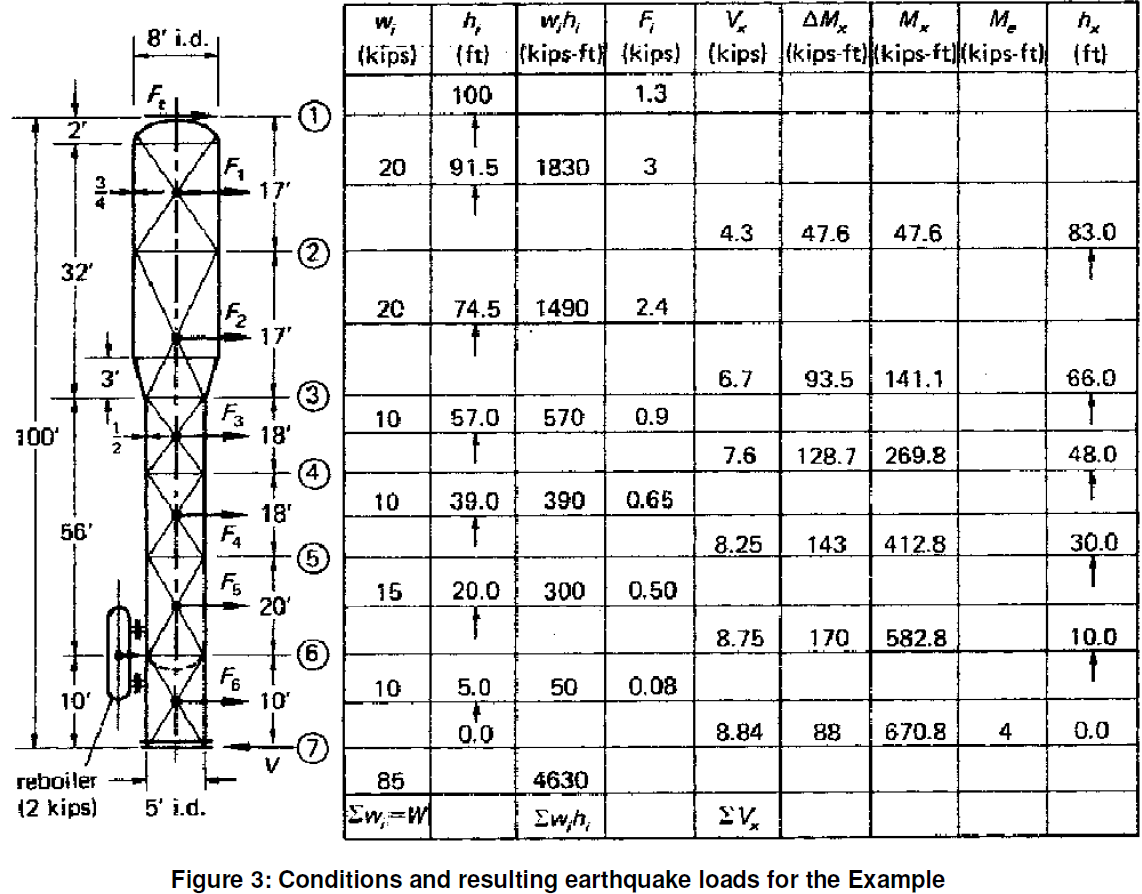 In computing T, it would seem to be conservative to assume that the period T for column 5-ft id x 100-ft high with uniformly distributed weight w = W/H will be shorter than that of the stepped down column in Figure 3. Using the formula for a uniform-diameter cantilever beam,

The transverse design shear Vx at hx elevations is equal to the sum of all lateral forces Fi above the section elevation hx. Taking J = 1.0, the incremental moments at particular section planes are

Please note that the above article has been taken from Bednar’s handbook. The reader is advised to refer to this handbook for further background material, especially section 4.7 for the procedure used to compute the basic period of vibration of tall, slender, self-supporting process columns.

Analysis of earthquake loads on pressure vessels has also been discussed by other authors and publications. Readers are advised to refer to them (see below) for further information.