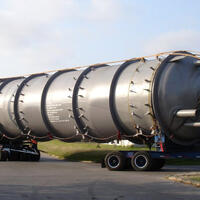 Surface condensers are the most common type used in power plants. They are essentially shell-and-tube heat exchangers, in which the primary heat transfer mechanisms are the condensing of the saturated steam on the outside of the tubes and the forced convection heating of the circulating water inside the tubes. Figure 1 is a schematic of a surface condenser with two passes on the water side. It is composed of a steel shell with water boxes on each side, the right one divided to allow for the two water passes. The water tubes are rolled at each end into tube sheets, and there are steel support plates at intermediate points between the tube sheets to prevent tube vibration. The hotwell that receives the condensate acts as a reservoir, with a capacity equal to the total condensate flow during a prescribed time, e.g., 1 min. 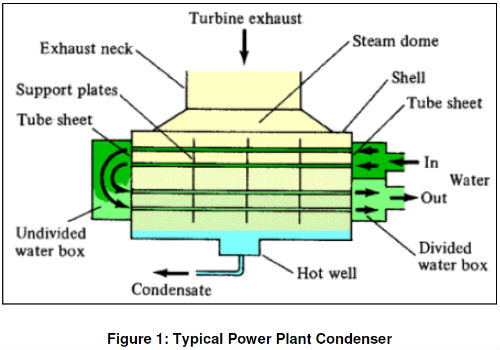 The early surface condensers used simple circular tubesheets that supported as many tubes as could be tightly packed between them. As powerplants and condensers grew in size, this simple design resulted in heat transfer problems because the upper tubes shielded the steam from effective condensing and in high steam pressure drop problems because of long tortuous path of the steam through the bundle. The heat transfer problem was solved by using larger spacings between the tubes (called ligaments) and placing them in rows that provided lanes or steam paths to allow the steam to penetrate deeply into the lower tubes.

The next improvement tackled the high pressure drops by cutting the bundle in half, thus in effect forming two smaller bundles side by side. This solution was, however, not sufficient for larger units because the bundles were still too deep for effective steam penetration. Four tube bundles were then used. This also helped reduce condenser height, an increasingly frequent requirement because of the low available head room in the plant.

The current design philosophy is to have a tube layout in the shape of a funnel with most tubes, and the largest tube passage area, where the steam enters the condenser from the turbine. As the steam condenses, its volume decreases, there are fewer tubes ad smaller passage areas. Steam is made to enter the tube bundle, or bundles, from all sides toward a central air cooler for dearation.

The tubes are rolled into the tube sheets at both ends to prevent leakage of the circulating water into the steam.  An expansion joint allows for the different rates of expansion between the tubes and the shell. The tube sheets are usually made of Muntz metal, which is similar to brass.

A problem of steam distribution, other than vertical penetration, is end-to-end or horizontal distribution that arises with present day long tube units. Tube lengths of 30 to 50 ft (~9 to 15 m) are commonplace. Multipressure condensers may have 70 to 90 ft (~21 to 27 m) long tubes. Long tubes result in larger changes in water temperature inside them and hence greater changes in condensing ability. Thus, the tubes would be too close at the cold end, where condensing is good, and too open at the hot end. A design compromise is, of course, necessary. These results in some short-circuiting that may be counteracted by cross baffles.

Number of Passes and Divisions

Condensers are designed with one, two or four cooling water passes. The number of passes determines the size and effectiveness of a condenser. Four passes are seldom used in utility installations. A single pass condenser is one in which the cooling water flows through all the condenser tubes once, from one end to the other. In a two-pass condenser, the water enters half the tubes at one end of a divided inlet water box, passes through these tubes to an undivided water box at the other end, reverses direction, and passes through the other half of the tubes back to the other side of the divided water box.

Water boxes are often divided beyond the divisions required by the number of passes. A divided water box single-pass condenser, for example, may have a partition in both the inlet and outlet water boxes at opposite ends of the condenser. This allows half the condenser to operate while the other half is being cleaned or repaired. In the case of a divided two-pass condenser, the water boxes are divided into four quarters. Divided water boxes have duplicate inlet and outlet connections, each with its own circulating-water circuit. Valves in the division plates permit backwashing by reversing water flow for cleaning purposes.

Large powerplants generally have two or more low-pressure turbine sections in tandem. The condenser may be divided in to corresponding sections or shells, situated below the low pressure sections. If the turbine exhaust pressure in all sections is the same, i.e., when the exhaust ducts are not isolated from each other, we would have a single-pressure condenser. If the exhaust ducts are isolated from each other, these individual condenser shell pressures will increase because the circulating water temperature will increase as it flows from shell to shell. We would then have a multipressure condenser.

Figure 2 shows a cross section of a typical modern large condenser. It is a single pass, single pressure, radial flow type condenser in which the steam enters the bundle from top, sides and bottom, and flows towards the center of the tube nest. At that point most of it has condensed, leaving only air and other non-condensable gases that are cooled before being removed by the deaeration system. Figure 3 shows a two-pass divided-box surface condenser. 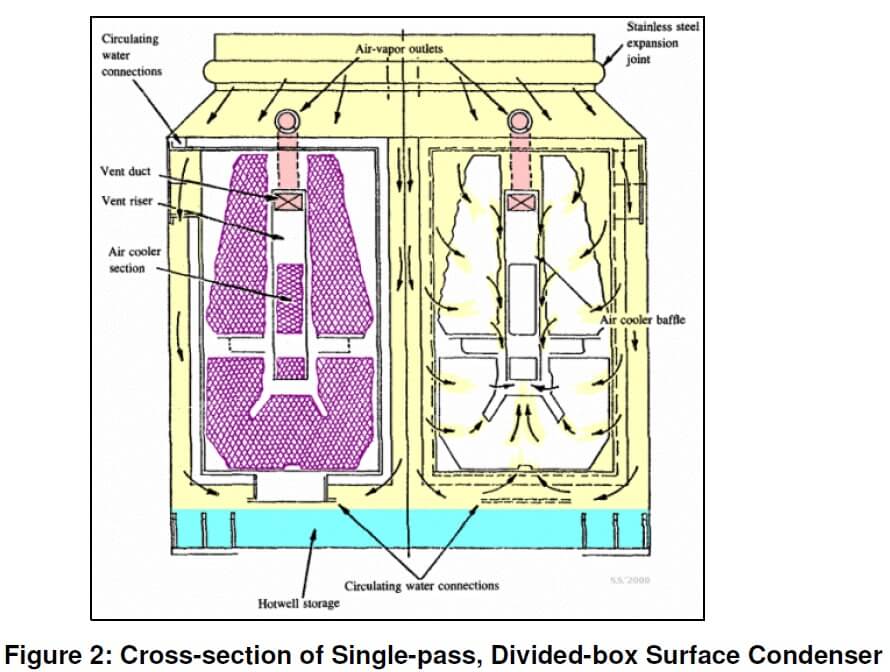 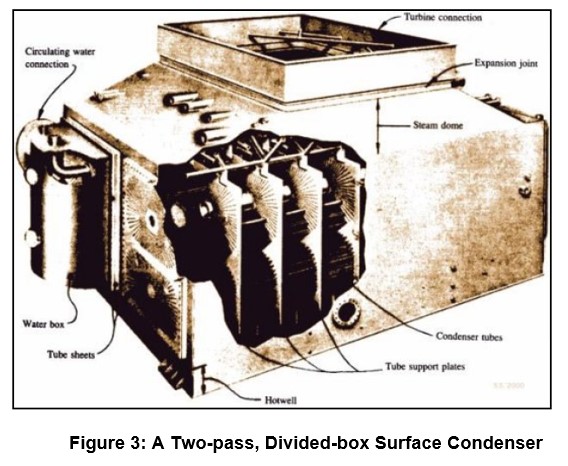 Most condensers commonly use a 7/8 or 1 inch of 18 gage tube, which is adequate for the water pressures encountered in condensers. Tube materials in common use are copper, 70-30 Cu-Ni, 90-10 Cu-Ni, 304 stainless steel, admiralty, and Muntz metal. Admiralty metal, the popular choice for a long time, although still occasionally specified, is being supplanted by type 304 stainless steel. Type 304 stainless steel, readily available at a reasonable cost, has excellent erosion and corrosion resistance in fresh water, and immunity to ammonia and sulfide attack. It also eliminates the risk of introducing copper ions into the feedwater, a potential possibility with other materials. Its disadvantages are low thermal conductivity and low resistance to chloride attack and biofouling. 90-10 Cu-Ni is another choice for freshwater application.

It is expected that, for the foreseeable future, stainless steel and copper-nickel will dominate the market for condenser tubes. Other materials of promise include titanium and AL6X, which are expected to see increasing service under severe conditions. In any case, no one material can function adequately without periodic cleaning, and there is a growing interest in devising methods of on-line cleaning (currently some nuclear power plants do employ on-line cleaning techniques for the condenser tubes).

In steam and other vapor cycles, it is important to remove the non-condensable gases that otherwise accumulate in the system. The non-condensables are mostly air that leaks from the atmosphere into those portions of the cycle that operate below atmospheric pressure, such as the condenser, but also include other gases caused by the decomposition of water into hydrogen and oxygen by thermal or radiolytic (under the influence of nuclear radiation) action and by chemical reactions between water and material of construction. The presence of non-condensable gases in large quantities has undesirable effects on equipment operation for several reasons.

The process of removing non-condensables is called deaeration. Most fossil fuel power plants have a deaerating feedwater heater, but whether or not a plant has such a heater, or other separate deaerator, it is essential that the condenser itself be the place of good deaeration. . Manufacturers usually guarantee a maximum oxygen concentration in the condensate leaving the condenser. For some time, the maximum was set at 0.03 cm3/L (0.03% by volume), but this has now been reduced to 0.01 cm3/L required, and 0.005 cm3/L frequently guaranteed.

Good deaeration within a condenser requires time, turbulence, and good venting equipment. The cold condensate falling from the lower tubes must have sufficient falling height and scrubbing steam for reheat and deaeration. The scrubbing steam is provided by allowing some of the incoming steam to pass through an open flow area directly to the bottom tubes to reheat the condensate. The reason is that non-condensables are more easy released from a hotter than a colder fluid.

Once the non-condensables are released, they are cooled to reduce their volume before being pumped out of the condenser. For this, a number of water tubes, about 6 to 8 percent in the center of the tube bundle are set aside for this function (See Figure 2). This, called an air cooler section, is baffled to separate the noncondensables from the main steam flow. The non-condensables flow toward the cold end of the condenser, where they connect to a vent duct that leads to jet pumps. These jet pumps are known as steam jet air ejectors (SJAE) because they use a steam jet as their motive or driving flow. They are usually multi-stage units, usually two or three. Figure 4 shows a two-stage SJAE. SJAE’s are very popular because of their simplicity and lack of moving parts, and hence low maintenance and good reliability. 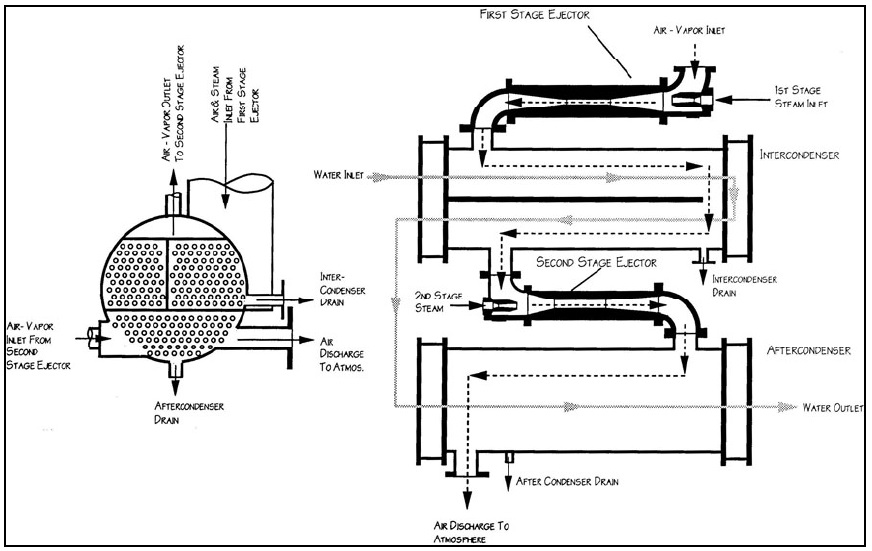 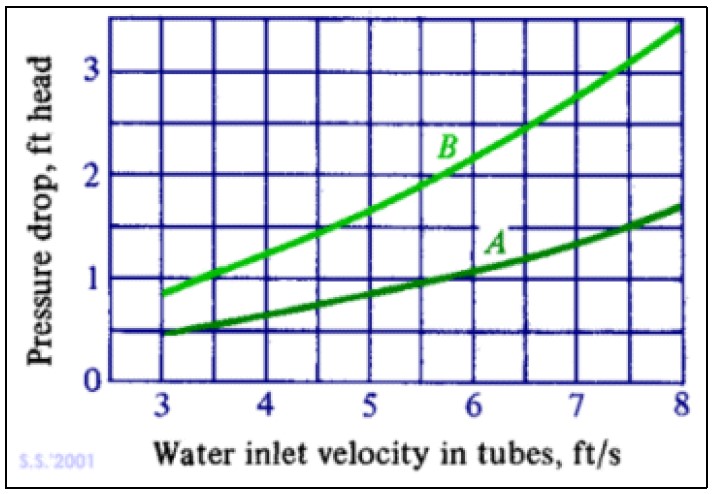 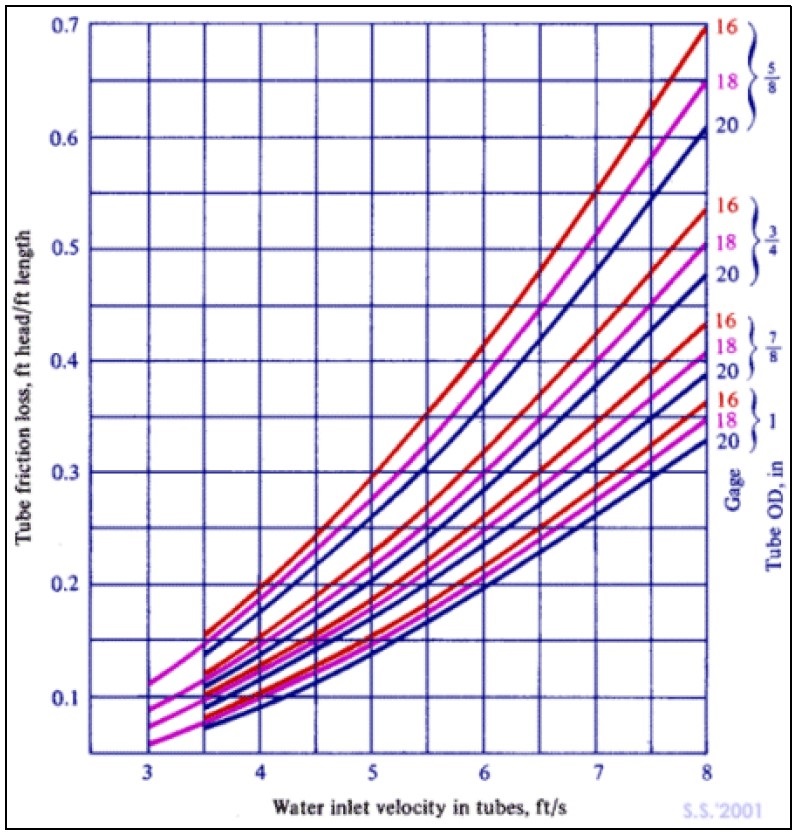