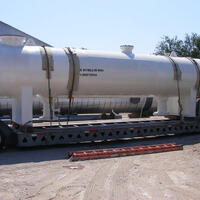 The principal components of shell-and-tube heat exchangers are:

Tubes are the basic components of shell and tube heat exchangers, providing the heat transfer surface between one fluid flowing inside the tube and the other fluid flowing across the outside of the tube. The tubes may be seamless or welded and most commonly made of copper or steel alloys. Other alloys of nickel, titanium, or aluminum may also be required for specific applications. Seamless tubing is produced in an extrusion process; welded tubing is produced by rolling a strip into a cylinder and welding the seam. Welded tubing is usually more economical.

Normal tube diameters are 5/8”, ¾” and 1”. Tubes of smaller diameter can be used but they are more difficult to clean mechanically. Tubes of larger diameter are sometimes used either to facilitate mechanical cleaning or to achieve lower pressure drop. The normal tube wall thickness ranges from 12 to 16 BWG (from 0.109 inches to 0.065 inches thick). Tubes with thinner walls (18 to 20 BWG) are used when the tubing material is relatively expensive such as titanium.

The tubes are held in place by being inserted into holes in the tubesheets and then either expanded into grooves cut into the holes or welded to the tubesheet where the tube protrudes from the surface. This prevents the fluid on the shell side from mixing with the fluid on the tube side. The tubesheet is usually a single round plate of metal that has been suitably drilled and grooved to take the tubes (in desired pattern - square or triangular), the gaskets, the spacer rods, and the bolt circle where it is fastened to the shell.

Two tubesheets are required except for U-tube bundles. A rolled joint is the common term for a tube-to-tube sheet joint resulting from a mechanical expansion of the tube against the tubesheet. This joint is most often achieved using roller expanders; hence the term rolled joint. Less frequently, tubes are expanded by hydraulic processes to affect a mechanical bond. Tubes can also be welded to the front or inboard face of the tubesheet. Strength welding designates that the mechanical strength of the joint is provided primarily by the welding procedure and the tubes are only lightly expanded against the tubesheet to eliminate the crevice that would otherwise exist. Seal welding designate that the mechanical strength of the joint is provided primarily by the tube expansion with the tubes welded to the tubesheet for better leak protection. The cost of seal-welded joints is commonly justified by increased reliability, reduced maintenance costs, and fewer process leaks. Sealwelded joints are required when clad tubesheets are used, when tubes with wall thickness less than 16 BWG (0.065 inch) are used, and for some metals that cannot be adequately expanded to achieve an acceptable mechanical bond (titanium and Alloy 2205 for instance).

Where mixing between the two fluids must be avoided, a double tubesheet such as is shown in Figure 2 may be provided. The space between tubesheets is open to the atmosphere so any leakage of either fluid should be quickly detected. 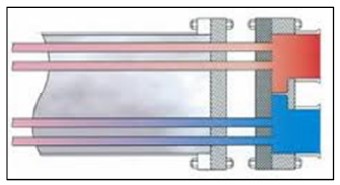 The tubesheet, in addition to its mechanical requirements, must withstand corrosive attack by both fluids in heat exchanger and must be electrochemically compatible with the tube and all tube-side material.

The shell is simply the container for the shell-side fluid, and the nozzles are the inlet and exit ports. The shell normally has a circular cross section and is commonly made by rolling a metal plate of appropriate dimensions into a cylinder and welding the longitudinal joint. Small diameter shells can be made by cutting the pipe of the desired diameter to the correct length. The roundness of the shell is important in fixing the maximum diameter of the baffles that can be inserted, and therefore the effect of shell-to-baffle leakage.

The inlet nozzle often has an impingement plate (See Figure 3) set just below to divert the incoming fluid jet from impacting directly at high velocity on top row of tubes. Such impact can cause erosion, cavitation and/or vibration. In order to put the impingement plate in and still leave enough flow area between the shell and plate for the flow to discharge without excessive pressure loss, it may be necessary to omit some tubes from the full circle pattern.

Tube-side channel and nozzles simply control the flow of the tube-side fluid into and out of the tubes of the exchanger. Since the tubeside fluid is generally more corrosive, these channels and nozzles will often be made out of alloy materials (compatible with the tubes and tubesheet of course). They may be clad instead of solid alloy.

The channel ends are provided with channel covers. They are round plates that bolt to the channel flanges and can be removed for tube inspection without disturbing the tube side piping. In smaller heat exchangers, bonnets with flanged nozzles or threaded connections for the tube-side piping are often used instead of channels and channel covers.

A pass divider is needed in one channel or bonnet for an exchanger having two tube-side passes, and they are needed in both channels and bonnets for an exchanger having more than two passes. If the channels or bonnets are cast, the dividers are integrally cast and then faced to give a smooth bearing surface on the gasket between the divider and the tubesheet. If the channels are rolled from plate or built up from pipe, the dividers are welded in place.

A segment, called the baffle cut, is cut away to permit the fluid to flow parallel to the tube axis as it flows from one baffle space to another. Segmental cuts with the height of the segment approximately 25 percent of the shell diameter are normally the optimum. Baffle cuts larger or smaller than the optimum typically result in poorly distributed shell side flow with large eddies, dead zones behind the baffles and pressure drops higher than expected.

For sufficiently large units, it is possible to go to triple segmental arrangements and ultimately to strip and rod baffles, the important point being always to insure that every tube is positively constrained at periodic distances to prevent sagging and vibration.

Other types of baffles are sometimes used such as: double segmental, triple segmental, helical baffle, EM baffle and ROD baffle. Most of these types of baffles are designed to provide fluid flow paths other than cross flow. These baffle types are typically used for unusual design conditions. Longitudinal baffles are sometimes provided to divide the shell creating multiple passes on the shell side. This type of heat exchangers is sometimes useful in heat recovery applications when several shell side passes allow the fluids to achieve a severe temperature cross. 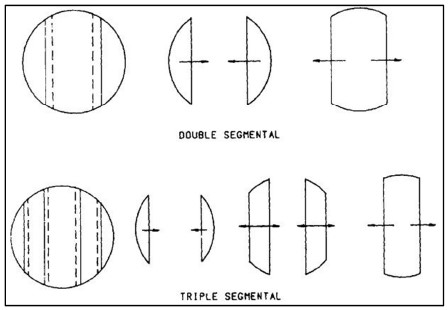 Tie rods and spacers are used for two reasons: 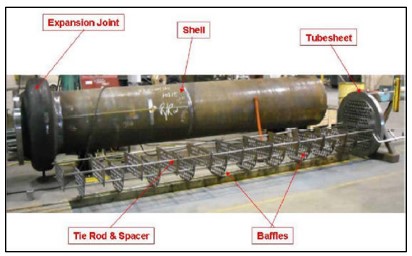 This is article is presented to you as a service from BOARDMAN, LLC located in Oklahoma City, Oklahoma.