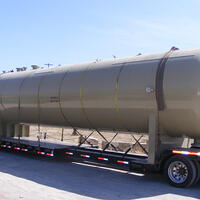 HAZARDS FROM OVERPRESSURE FROM A RUPTURED VESSEL OR PIPING SYSTEM

To address the risks associated with pneumatic pressure testing, many companies attempt to limit the amount of stored energy in the test system to a prescribed maximum value by limiting the size of each test system. This approach is often impractical for high pressure piping of typical diameters because of the severe limitation that it places on the size of each test system. Consequently, this approach may result in an unreasonably large number of test systems. Attempting to isolate and test a large number of test systems may prove to be impractical. When the approach of limiting the amount of stored energy becomes impractical, an alternative approach, such as that described herein, may offer the best option. Regardless of which approach is taken, many of the considerations outlined in this article must be taken into account to safely execute high-pressure, pneumatic pressure testing.

A variety of measures can increase the safety of pneumatic testing. Of first importance are measures to ensure the mechanical integrity of the vessels and piping systems undergoing testing. These measures include design, fabrication, and inspection methods.

It is also necessary to bar personnel from exclusion zones (an area where personnel are prohibited to enter) surrounding the vessel or piping system under test, and to conduct tests at night or on weekends when few people are in the vicinity of the test site

RUPTURE OF A PIPING SYSTEM UNDER PRESSURE PRODUCES A BLAST WAVE.

Overpressure has the potential to affect most of the nearby area surrounding the piping under test. Therefore, the minimum exclusion zone in this work is defined as a zone within a radius beyond which the overpressure from rupture of the piping system under test will not exceed 0.5 psig.

"Due to the large amount of energy stored in compressed gas and the potential hazard of a sudden release of this energy, pneumatic testing should be avoided if at all possible. The data in Table 1 illustrate the comparative risk of a pneumatic test versus a hydrostatic test:

A pneumatic pressure test should only be considered if a hydrostatic test has been carefully reviewed and determined not to be feasible. When pneumatic testing is necessary, there are many critical safety precautions that must be considered. Some important considerations are:

For the example cited above, with approximately 2,000,000 ft-lbs of stored energy (equivalent to one pound of nitroglycerine) the restricted distance using the NASA Glenn Research Center methodology would be 80 feet.