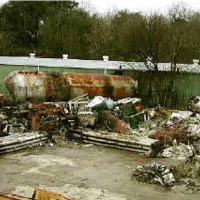 Improperly operated or maintained pressure vessels can fail catastrophically, kill and injure workers and others, and cause extensive damage even if the contents are benign.

Three workers were killed and a number of others were injured when a high-pressure vessel containing air and water ruptured. The vessel that ruptured was originally designed with a working pressure of 1740 pounds per square inch (psi), but was operating between 2000-3000 psi. After a number of years of service, the vessel developed a pin-hole leak. The leak was repaired but not in adherence with recognized codes. About a month later, the vessel failed catastrophically at the weld area. The vessel ripped apart and rocketed through the roof. Major pieces of shrapnel weighed from 1000 to 5000 pounds. Some pieces were thrown a half mile away. Fortunately, people on a nearby highway and a nearby commuter railway narrowly missed injury. Damage to the plant was extensive and a portion of the state was without phone and electrical services for many hours.

This accident demonstrates the potential danger of pressure vessels if they are not properly designed, constructed, operated, inspected, tested, or repaired. The higher the operating pressure and the larger the vessel, the more energy will be released in a rupture and the worse the consequences. It should be emphasized that the danger exists even if the vessel contents are not flammable, reactive, or explosive. In the case above, a vessel containing only water and air ruptured and released great energy. Had the contents of the vessel been flammable and/or toxic, the consequences would probably have been magnified.

The following conditions and factors have played major roles in pressure vessel accidents:

Among the questions to be asked and answered are the following:

This incident provides information regarding an explosion and fire that occurred at the Marcus Oil facility in Houston, Texas in December 2004. Investigators determined that the explosion resulted from faulty welds in a steel process pressure vessel. 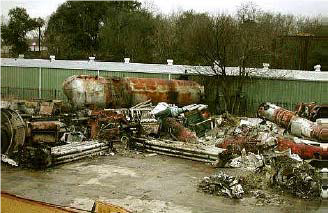 In its final investigation report on the explosion, the U.S. Chemical Safety Board (CSB) describes the violent explosion of a 50,000-pound steel pressure vessel at the Marcus Oil and Chemical facility. The explosion was felt over a wide area in Houston and ignited a fire that burned for seven hours. Several residents were cut by flying glass.

Building and car windows were shattered, and nearby buildings experienced significant structural and interior damage.

The Marcus Oil facility refines polyethylene waxes for industrial use. The crude waxes, which are obtained as a byproduct from the petrochemical industry, contain flammable hydrocarbons such as hexane. The waxes are processed and purified inside a variety of steel process vessels. The vessel that exploded was a horizontal tank 12 feet in diameter, 50 feet long, and operated at a pressure of approximately 67 pounds per square inch.

The case study report and accompanying safety recommendations have been posted to the CSB web site (http://www.csb.gov).

Investigators determined that the failed vessel, known as Tank 7, had been modified by Marcus Oil to install internal heating coils, as were several other pressure vessels at the facility. Following coil installation, each vessel was resealed by welding a steel plate over the 2- foot-diameter temporary opening. The repair welds did not meet accepted industry quality standards for pressure vessels. Marcus Oil did not use a qualified welder or proper welding procedure to reseal the vessels and did not pressure-test the vessels after the welding was completed. 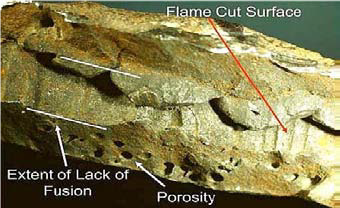 The weld used to close the temporary opening on Tank 7 failed during the incident because the repair weld (see figure) did not meet generally accepted industry quality standards for pressure vessel fabrication. The original, flame-cut surface was not ground off the plate edges before the joint was re-welded, and the weld did not penetrate the full thickness of the vessel head. Furthermore, the welds contained excessive porosity (holes from gas bubbles in the weld). These defects significantly degraded the strength of the weld.

Investigators found that Tanks 5, 6, 7, and 8, the nitrogen storage vessels, and the compressed-air storage vessel were not equipped with pressure-relief devices, as required by the American Society of Mechanical Engineers (ASME) Boiler and Pressure Vessel Code. However, this was not a factor in causing the incident.

Marcus Oil used air instead of nitrogen to boost the pressure of the vessel, and the oxygen inside the tank allowed the ignition of the flammable material, most likely by sparks from the metal fragments. The fire spread back into the damaged tank and caused a violent explosion, which propelled the 25- ton vessel more than 150 feet.

"If the provisions of internationally recognized pressure vessel safety codes had been required and enforced, this accident would almost certainly not have occurred," CSB Board Member John S. Bresland said.

The incident at the Marcus Oil facility underscores the importance of compliance with pressure vessel and inspection codes and the use of qualified welders. Equally important is understanding the potential hazards introduced with process changes.