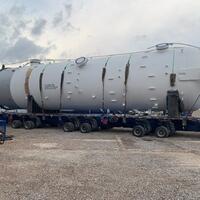 In a previous edition of Fabrication News, we discussed the additional requirements for designing and fabricating pressure vessels for lethal service. As you can imagine, the requirement for piping in and out of lethal service pressure vessels would have additional requirements as well. Integrity and reliability are critical for piping and equipment that handle chemicals with extreme health hazards. 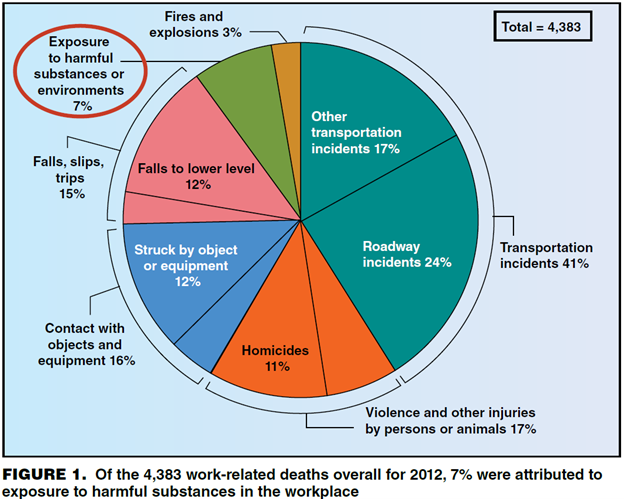 Working in close proximity to the high pressures and temperatures commonly found in the chemical process industries (CPI) is cause enough for concern over a person’s wellbeing; but working in close proximity to chemicals that are considered toxic, hazardous or reactive escalates that concern to a higher degree (Figures 1 and 2). The dangers of such chemicals underline the paramount importance of integrity and reliability in the design of equipment and piping systems.

From a regulatory standpoint, the requirements to which each chemical processing facility in the U.S. must adhere when manufacturing, handling or storing chemicals are set forth within the regulations of the U.S. Occupational Safety and Health Administration’s (OSHA; Washington, D.C.) “Process safety management of highly hazardous chemicals” regulation (part of 29 CFR 1910.119). OSHA also provides guidance for the required “Process Hazard Analysis” procedure.

From a piping engineering standpoint, requirements for the design, fabrication, inspection, examination, testing and installation of piping used to handle potentially lethal fluids are stipulated in the American Society of Mechanical Engineers (ASME; New York) B31.3 Process Piping Code, Piping for Category M Fluid Service (Chapter VIII). This article provides a deeper understanding of existing regulations and code standards, and guides engineers in determining when a fluid should be considered potentially lethal. And for those cases involving lethal fluids, the article provides information on what attributes need to be considered in the design of piping systems to handle them.

People working in CPI facilities have every right to expect that they will return home safely after completing their shift. It is the job and responsibility of every designer and engineer of CPI facilities to ensure that this expectation is achieved.

Perceptions of chemicals and integrity can be influenced by catastrophic incidents that draw the attention of the public and lawmakers (Figure 3). Examples of such disasters include the following: the 1984 Bhopal, India incident that resulted in deaths in the several thousands and injuries in excess of 500,000; the October 1989 Phillips Petroleum Co., Pasadena, Tex., incident that resulted in 23 deaths and 132 injuries; the May 1991 IMC, Sterlington, La., incident that resulted in 8 deaths and 128 injuries; the September 2005 explosion at the Texas City, BP refinery where 15 were killed and 180 injured; and the February 2010 explosion at the Kleen Energy Power Plant in Middletown, Conn. that killed 6 and injured more than 50 personnel. 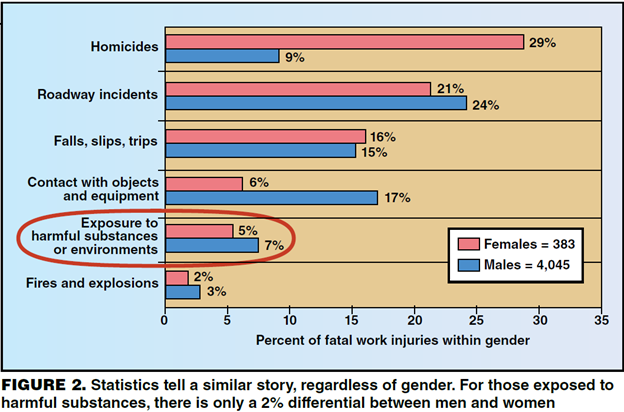 Not only do such incidents capture the attention of the public and lawmakers alike, they also capture the attention of organizations such as the NFPA (National Fire Protection Association) and ASME. These and other organizations will quite often modify or introduce content into their codes and standards in response to the causal effects of such incidents.

While many relevant factors are required for a safe operating facility, including a well-thought-out preventive maintenance program and operating procedures, this article will concentrate on piping.

Information on chemical substances comes from many sources. To put the discussion of potentially lethal chemicals into context, we can consider such resources as the NFPA, OSHA (29CFR), the U.S. Environmental Protection Agency (EPA) (40CFR), and REACH (Registration, Evaluation, Authorization and Restriction of Chemicals), a European Union Regulation, as well as the U.S. Dept. of Transportation (DOT; 49 CFR).

Focusing even further, this article considers only those chemicals that are considered lethal from a toxic standpoint. This set of chemicals meets the criteria for ASME B31.3 Category M Fluid Service.

The 2012 edition of the ASME B31.3 Process Piping Code defines Category M fluid service as: “a fluid service in which the potential for personnel exposure is judged to be significant, and in which a single exposure to a very small quantity of a toxic fluid, caused by leakage, can produce serious irreversible harm to persons on breathing or bodily contact, even when prompt restorative measures are taken.”

The OSHA Hazard Communication Standard, Subpart Z, Toxic and Hazardous Substances 29 CFR 1910.1200, defines hazardous chemicals as those that present “a physical hazard or a health hazard.” The standard goes on to define physical hazard as “a chemical for which there is scientifically valid evidence that it is a combustible liquid, a compressed gas, explosive, flammable, an organic peroxide, an oxidizer, pyrophoric, unstable (reactive) or water-reactive.”

It also defines a health hazard as “a chemical for which there is statistically significant evidence based on at least one study conducted in accordance with established scientific principles that acute or chronic health effects may occur in exposed employees. The term ‘health hazard’ includes chemicals which are carcinogens, toxic or highly toxic agents, reproductive toxins, irritants, corrosives, sensitizers, hepatotoxins, nephrotoxins, neurotoxins, agents which act on the hematopoietic system, and agents which damage the lungs, skin, eyes, or mucous membranes.”

When defining the term “toxic” in Appendix A of 29 CFR 1910.1200, OSHA separates the criteria according to three forms of human exposure.

The same Appendix A also defines a category of chemicals that are “highly toxic” in three forms of human interaction as well:

Also found in this discussion is the term “highly hazardous chemicals.” OSHA defines this as “…a substance possessing toxic, reactive, flammable or explosive properties…” While this definition reaches beyond the scope of this discussion, it nevertheless captures the essence of and remains within the realm of potentially lethal chemicals.

Most CPI facilities must comply with the ASME B31.3 Process Piping Code, whether by state regulatory requirements, by contractual obligation or by self-stipulation. The code requires all fluid services used for processing to be categorized in accordance with B31.3. One such category to be considered will be the aforementioned Category M fluid service. The definition, as stated previously, suggests that such fluids can be lethal or at the very least debilitating to humans upon exposure. While ASME does not extend its definition to a list of possible Category M chemical candidates, other resources do, although in a different manner. Various agencies consider these types of chemicals as hazardous or poisonous to personnel. OSHA, DOT, EPA and NFPA each provide their own listing of what they consider to be hazardous or poisonous chemicals based on their own set of criteria. 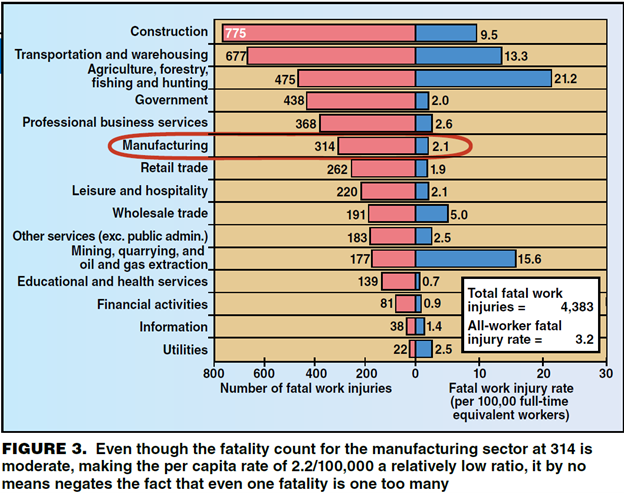 By adopting the consensus of one or more of these resources for determining whether a chemical is hazardous or poisonous, and therefore under consideration as a Category M Fluid, an owner can use such lists as a resource in determining which chemicals within their facility may be considered Category M Fluid service candidates.

OSHA. Under 29 CFR, OSHA provides a listing of Highly Hazardous Chemicals, Toxics, and Reactives. However, their list is broad in its interpretation and provides a “threshold quantity” (TQ) for each chemical, which requires further consideration on the part of the owner. This is a good resource, but not without the need for additional analysis.

EPA. The EPA, under 40 CFR, provides a listing of hazardous substances as defined by the EPA under the TSCA’s Chemical Substance Inventory list (http://www.epa.gov/oppt/existingchemicals/pubs/tscainventory/howto.html). This is justifiably a broad interpretation of hazardous chemicals that does not define or categorize the various chemicals to the extent that it would assist the owner in making a Category M determination.

DOT. The Hazardous Material Table in 49 CFR has 23 Class and Division Numbers that categorize chemicals according to their degree of hazard, or nonhazard, for the purpose of transportation. Of those 23 classes and divisions, three would be classified as Category M Fluids as follows: 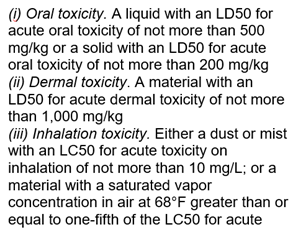 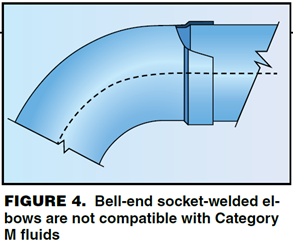 DOT and NFPA. Using both the Hazardous Material Table in 49 CFR and NFPA’s Table of Chemical Ratings a determination of possible Category M Fluids can readily be made. Any chemical flowing through pipe or tubing listed as either a “4” in the Health column of NFPA’s Table of Chemical Ratings, or as a “Forbidden”, “2.3,” or “6.1” in the “Hazard Class or Division” column of the Hazardous Materials Table in 49 CFR could be considered a Category M Fluid.

While these two resources provide essentially the same information, they do so with two different objectives, and therefore do not always agree. For example, NFPA considers bromine a Class 3 (Warning: corrosive or toxic, avoid skin contact or inhalation). While the DOT, under 49 CFR, considers bromine a Class 6.1 (Poisonous materials). NFPA considers chloroform a Class 2 (Warning: May be harmful if inhaled or absorbed), while the DOT considers chloroform a Class 6.1.

Regardless of whether or not they agree on the hazard level of a chemical, if a chemical is indicated as a 4 by NFPA, or “Forbidden” 2.3, or 6.1 by the DOT, it should be considered a potential Category M Fluid.

There are various aspects of piping design that go beyond the scope and dictates of a code. And therein lies the point at which good design and engineering practice supplement the sound basis of code requirements and blends with the owner’s particular needs and a facility’s proprietary specifications.

The B31 series of codes address the requirements necessary to assure system safety and integrity by specifying material limits, stipulating fabrication requirements, providing minimal examination requirements, and so on. They do include some essential design guidelines when needed to achieve that assurance. They cannot specify routing requirements or when to use double-containment piping systems, determine accessibility, or whether this type of piping can or cannot run underground, in addition to other proprietary design elements. This degree of detail is owner- or site-specific. Even within a large, multi-facility corporation, these requirements may vary from plant to plant.

Whenever a chemical, designated as a Category M Fluid, is made part of a project, there should be a well-defined basis of design established by the owner or engineer in order to convey to the designer a predetermined set of design parameters.

The introduction to the ASME-B31.3 piping code states that “The designer is cautioned that the code is not a design handbook…” In stating this, ASME is explaining to the reader in very few words that this code will not provide pointers on the best way to route a piping system, how to support piping, or the amount of slope a pipeline might require. It will instead provide criteria, methods and formulas for such things as how to determine maximum loads on piping and ways to test installed piping for leak integrity. Just as the piping code provides the criteria for welding, but does not explain how to weld, it also provides the minimum requirements necessary for a safe piping system, but does not tell engineers how to design it.

The 2012 ASME B31.3 Piping Code is composed mainly of ten chapters and nineteen appendices. The first six chapters are considered the base code.Supplementary to the base code are four additional chapters that pertain to the specific needs of piping systems with conditional requirements that vary from the content of the base code.

The supplemental chapters, VII through X, use the same paragraph numbers as the base code, along with a prefix that identifies the particular chapter with which it is associated.

Since 1910, Boardman has been a respected custom fabricator. We take pride in our ability to take the most stringent specifications and requirements to provide a high quality solution to our customers.

With more than 75 years of ASME Section VIII, Division I engineering experience, we have the unique ability to provide custom solutions to our customers. Fabricated Projects Include: