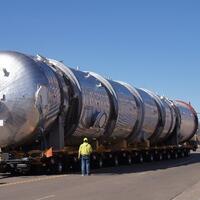 The introduction to the ASME-B31.3 piping code states that “The designer is cautioned that the code is not a design handbook…” In stating this, ASME is explaining to the reader in very few words that this code will not provide pointers on the best way to route a piping system, how to support piping, or the amount of slope a pipeline might require. It will instead provide criteria, methods and formulas for such things as how to determine maximum loads on piping and ways to test installed piping for leak integrity. Just as the piping code provides the criteria for welding, but does not explain how to weld, it also provides the minimum requirements necessary for a safe piping system, but does not tell engineers how to design it.

The 2012 ASME B31.3 Piping Code is composed mainly of ten chapters and nineteen appendices. The first six chapters are considered the base code. Supplementary to the base code are four additional chapters that pertain to the specific needs of piping systems with conditional requirements that vary from the content of the base code.

The supplemental chapters, VII through X, use the same paragraph numbers as the base code, along with a prefix that identifies the particular chapter with which it is associated.

With that said, we will take a look at just a few of the variances required by ASME B31.3 for piping systems containing a fluid service that may be considered lethal with human contact. This portion of the article is intended to provide examples of the types of variances that are required for Category M type fluid services beyond what is stated in the base code.

subjected to external moment loading, such as with thermowells. Section M307.2(b) states, “Only metallic valves conforming to the following requirements may be used:

The italicized phrase above refers to a pressure-seal bonnet design (Figure 5). Such a design, which will vary between valve manufacturers, uses the internal operating pressure of the fluid as a sealing force; as the internal pressure increases the sealing load on the pressure-seal gasket increases. This provides an increase in the sealing integrity of the bonnet joints.

The above are just a few examples of the added requirements stipulated for Category M Fluid Service piping. There are many other instances in which the requirements for the construction of potentially lethal piping systems go beyond that of the base code. And one more example of that lies in the examination requirements.

For the degree of examination of equipment required, Paragraph 341.4.1 applies with the following exceptions:

This sheds light on the fact that these types of piping systems demand a much higher level of scrutiny when being evaluated and are examined to a much higher degree than required for normal fluid services.

The need to integrate and instill personnel safety and well-being into the operation and maintenance of a CPI facility is a basic essential. Such a core philosophy extends from the conceptual design of a facility to its ultimate operation. But this, too, is applied in degrees. The design and material specifications for a chilled-water system certainly would not apply to a system containing a hazardous or potentially lethal chemical. The added cost necessary to attain the integrity required for the more hazardous chemical service would be money poorly spent on a chilled-water system.

In designing a piping system for a highly hazardous chemical, engineers need to give added consideration to the following key design elements: 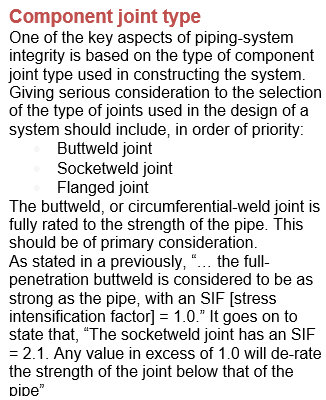 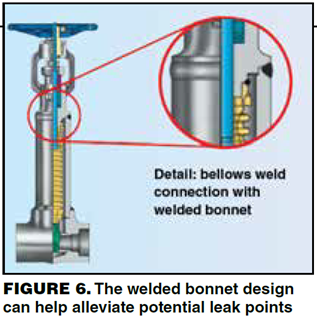 Where flanges are specified for equipment connections and breakout joints, the weak point in the flange joint assembly is the gasket. Should a fire occur, temperatures could reach into the 2,700 to 3,000°F range, and the gasket material would be compromised. This would cause the joint to lose its seal and leak deadly toxins.

The shortlist of requirements for a valve that is intended to handle highly hazardous fluids would include the following items:

Quarter-turn valves, such as ball, plug and butterfly valves are great for ease of operation and quick on/off requirements. Those attributes are not necessarily what is needed for highly hazardous fluids. What is needed, particularly for manually operated valves, are valve types that offer control over response time. Multi-turn valves, such as gate and globe valves are a safer valve option from the standpoint of control. A valve handle that extends out away from the valve body risks being inadvertently bumped and unknowingly opened.

It is suggested that a valve have either buttweld (preferred) or socketweld ends. If there is a need to remove the valve periodically, then a valve with flanged ends could be a consideration, but any type of mechanical joint should be used sparingly and with due consideration.

The valve bonnet is a mechanical joint, and is therefore a potential leak point. Two bonnet designs help alleviate this possibility: the welded bonnet (Figure 6) and the pressure-seal bonnet. If access to the valve’s internals is not a concern, then the welded bonnet would be a consideration. If access to the valve internals is needed, the pressure-seal bonnet would be an option.

The pressure-seal bonnet is designed to utilize internal pressure to increase its sealing capability in direct response to an increase in internal pressure (Figure 5). As internal pressure increases, so too does the load on the gasket (H in Figure 5), creating a seal that exceeds that of the initial gasket pre-load. The bonnet take-up bolts (E) establish the initial load on the bonnet gasket. The segmental thrust ring (F) provides the sealing surface against which the gasket load is applied. This design provides a high degree of sealing integrity.

The part of a valve that is most prone to leak is at the interface of the valve stem and the packing used to prevent leakage. The addition of the bellows seal design prevents fluids or vapors from escaping to the atmosphere should a leak occur in the stem packing. The bellows creates a hermetically sealed barrier between the service fluid and the stem. This significantly alleviates the possibility of stem leakage.

An essential to designing a piping system handling a highly hazardous fluid is the ability to safely and completely drain the system. Piping should be sloped at a degree that will allow free draining of all liquids to a point where it can be captured for containment and removal. The design and layout should be done in such a way as to provide for the following:

At the onset of a fire, explosion or major rupture and leakage in a processing unit, any system containing a highly hazardous fluid or any fluid that can be considered flammable should have a means to isolate and halt its flow at a point outside the battery limits of the facility in distress. If there are fluid supply lines in which flow cannot be halted, there should be a means of diverting the fluid to a safe secondary location, away from the location of the emergency.

Shutting down these pipelines should be done with automated valving from a remote location. Manual valve isolation, while sufficient for isolating systems for maintenance work and planned turnarounds, is not practical when an event calls for the evacuation of all non-essential personnel.

In the event of an emergency, the plan should be to give the first responders the best opportunity to get the situation under control. This means stopping the flow of all flammable and otherwise hazardous fluids from entering the area where the event has occurred. And, as mentioned under “System drainability,” design the system so that once all of the fluids are stopped from entering the area, any residuals in the area are drained to a pressure vessel so they can then be pumped out of the area to a secondary location, such as a flare stack or secondary containment. Stopping flow and removing all of the hazardous fluids from the area is a key element in preventing escalation and perpetuation of an already bad situation.

It is necessary to have instruments, gages and valves extending at various angles from piping. But while there is a need for such things as pressure and temperature gages, drain and vent valves, Y-strainer drains and hose connections, added consideration needs to be given to the branch design of these types of protruding components. These types of components protruding from a pipeline should be kept in a vertical plane. Extending these branches horizontally from the pipeline adds the risk that such an extension opens the opportunity for the gage or valve to be struck by a maintenance cart or by some other means with enough force to rupture the piping and cause a catastrophic rupture.

Unless these highly hazardous chemicals are used throughout a plant site, injection of these fluids into a process stream would be accomplished inside the room. This would be done by routing the process piping into and out of the controlled-access room, where the addition of these fluids into the process stream would take place. This keeps the raw hazardous chemicals contained and better controlled.

Alarmed and redundant atmosphere-sampling and leak-detection devices would be put in place to notify the control room, first responders and all plant personnel that leakage has been detected, followed by a scripted announcement regarding any action to be taken.

Designing a facility to accommodate the storage and handling of highly hazardous chemicals does not end with proper design and construction. It is an ongoing effort of developing procedures and a training program such as that described in OSHA’s “Process Safety Management Guidelines for Compliance” (https://www.osha.gov/Publications/osha 3133.html).

Developing procedures and a training program for those that have to work on or around piping and equipment that contain highly hazardous chemicals is essential. And in so doing, the process helps identify possible areas that could be improved upon, either from a security standpoint or from the standpoint of making improvements to the design of the piping system itself.

Proportionally, there are few catastrophic events that occur in chemical processing facilities. The majority of incidents originate from small leaks that were discovered in time to evacuate personnel, shut down the system and rectify the situation. And most catastrophic events stem from a series of indicators that were largely ignored until the unthinkable finally happened. Such events did happen in Bhopal, India; Pasadena, Tex.; Sterlington, La.; Texas City, Tex.; and Middletown, Conn. In each case, protocol was pushed aside, specific concerns were ignored, and in some cases, the cost-to-risk evaluation was tilted to the side of cost over risk. Meaning that even though the risk was high, the cost of remediation was more than the company wished to incur.